In honor of Black History Month, we celebrate Oscar Micheaux and his film, Within Our Gates. The oldest surviving film made by an 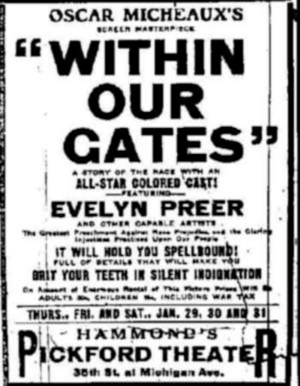 African American, Within Our Gates was written, produced and directed by Micheaux.

This film was released in 1920 in a storm of controversy. Due to the danger they would face by screening this film, especially in the South, many theater owners refused to book it. One of their largest concerns was a scene where a black man is the victim of a white lynch mob, not an uncommon occurrence for the time but one that other filmmakers were not tackling. Despite facing substantial challenges, Micheaux continued to make films that tackled problems of racial inequality.

He felt that it was his duty to confront these issues and leave an impression on his audience.

Micheaux was not only a pioneer among African American filmmakers, he was also among the first to use what we now call crowdfunding in the making of a motion picture. In 1913, he had successfully funded his first novel, The Conquest: The Story of a Negro Pioneer, by selling advance copies.

When studios refused to back a film with an African American director, he sold shares of stock in his company, the Micheaux Film and Book Company, for $75-100 each. Through this process, Micheaux raised the $10,000 budget for his first feature film, 1919’s The Homesteader. Unfortunately, no copies of the Homesteader are known to exist today but we can still watch Within Our Gates. It is available below thanks to Internet Archive. To the best of our knowledge, this film is within the public domain, and it is in that spirit that we share it with you.