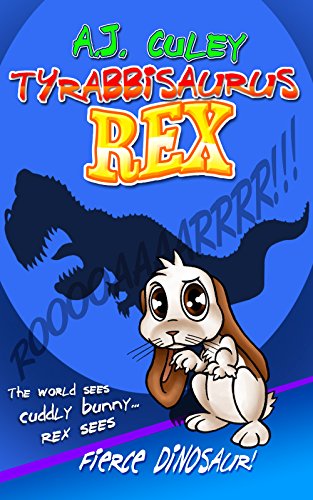 Tyrabbisaurus Rex doesn’t appreciate being locked in a cage. Sure it has three levels and is full of scrumptious veggies, but that doesn’t mean he’s willing to accept his fate as a classroom pet.

Ginger’s not happy about the always escaping, poopy rabbit. First he chewed the dress her mom gave her. Now he keeps staring at her favorite hat. The demon bunny has got to go!

Warning: This book contains bunny poop, impostor veggies and rabbit teeth of doom. Read at your own risk. 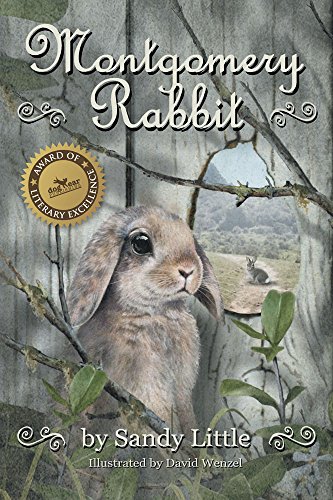 Adventures and mysteries await a young lop-eared rabbit when he accidentally falls through a hole in an old white fence. With no way back to his shady, comfortable yard, Montgomery sets out to explore the world beyond. Along the way, he meets a field rabbit named Bentley, and the two are off in search of a legendary raspberry patch. Their mission is a treacherous one, and Montgomery will come face-to-face with predators he’s never known before—coyotes, hawks, and even a rattlesnake! But the two rabbits find that by helping each other, and by accepting the help of a few new friends, they just might reach their treasure: a patch of juicy red raspberries! Montgomery and Bentley’s adventure is one of danger, excitement, and self-discovery, as the rabbits learn important life lessons and discover a friendship to last a lifetime.

Available on Kindle, Paperback, and Hardcover

The Rabbit Ate My Homework by Rachel Elizabeth Cole 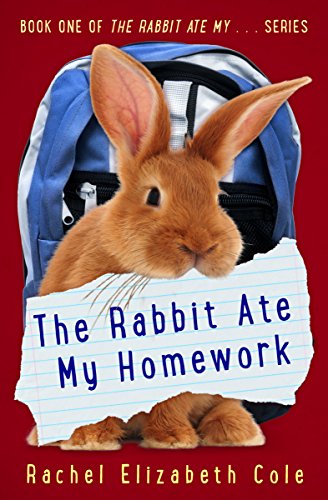 Eleven year-old Drew Montgomery has not, does not, and will not ever want a stupid old rabbit. All they do is sit in their cages, eat carrots, and poop. Then his annoying little sister blackmails him into hiding a bunny in his closet. She knows what really happened to his “stolen” bike and she’s threatening to tell. Now Drew’s in a real jam. If his “No pets!” parents find the rabbit or, worse, his sister blabs the truth, he’ll be grounded till grade seven for sure.

And if that’s not enough trouble, two girls at school drag him into a prank war that goes from bad to worse–and it’s all the rabbit’s fault. Plus, the weirdest girl in his class wants to be his science partner. If she tells him she wants to be his girlfriend, he just knows he’s gonna die.

Drew must find a way to outwit the mean girls, wiggle out of the blackmail deal, and get rid of the rabbit before it destroys his bedroom and his life.

Available on Kindle, Hardcover and Paperback

Petals from Andie Gallo and Kay Dominguez, with music by Stijn van Wakeren

An idealistic bunny, a cynical cat, and a flower that ties their lives together. Designed to promote moral and environmental values in children.

The Night of the Rabbit from Daedalic Entertainment

Lose yourself in a tale of magic and wonder, where anything is possible and where nothing is quite as it seems: join young Jerry and follow a peculiar white rabbit to the wondrous realm of Mousewood, a land where critters can speak and where mystery abounds.

It is here that Jerry’s dream of being a magician comes true, though a haunting, sinister force casts a long shadow over the forest. Someone offers the residents of Mousewood a deal of their lifetime – tickets to the greatest magic show that the world has ever seen. But the price is steep, as they’ll have to stake their most precious possessions and also their lives.

As the shadows grow deeper, the residents of Mousewood have only Jerry to turn to. On an adventure full of laughter and tears, joy and fear, the young boy will face the ultimate trial, leaving behind the world he once knew, and his childhood, too, will become a thing of the past.

Bayla Bunny has lots of energy and once she starts going she seldom stops. When she finds a book full of maps to magical treasures, she sets out on a journey to find them all. In this exhilarating platformer game you get to help her hop, run, jump, bounce, duck, swing, rocket and ride through 27 different courses as she collects coins, finds the keys and unlocks the treasure chests.
Encounter enemies such as rowdy raccoons, pushy porcupines, raging bulls, evil mushrooms, crazy plants and frog kings all while avoiding flying arrows, rolling barrels, dancing fireballs, speedy cannonballs, pounding hammers and dangerous dynamite!